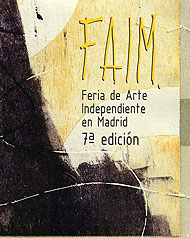 Feria de Arte Independiente de Madrid or (Independent Art Fair of Madrid) opens its doors today 28th September, 2006 and runs until the 1st October. The objective of the fair is quite clear: to support and promote independent artists, whose art is exhibited without an
y intermediaries (sounds like I translated that one directly!!).

The exhibition (fair) takes place in the Pabellón de La Pipa del Recinto Ferial de la casa de Campo de Madrid, where over 200 artists from countries as diverse as Bulgaria, Denmark, France, Portugal, Canada, Israel, China and Argentina and, obviously, Spain will display their art. Each year one country acts as the "invted country" and this year it falls to South Africa, whose ambassador will open the fair.