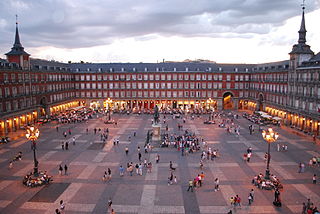 The principal square in Madrid is the Plaza Mayor, which is south west of the Puerta del Sol. Built between 1617 and 1619, and restored in 1790 after a fire, it is in a part of the city known as “Madrid de los Austrias” (the Hapsburg monarchs having built it.), or what I prefer to call “Old Madrid”. It is probably one of the finest plazas in Spain, though Salamanca comes a close second (that’ll upset some people!).

The centre of the square is occupied by a statue of Philip III who was responsible for the construction of the square. The Plaza Mayor was once the focal point of the old city, where bullfights, royal coronations and even the inquisition took place.

The first building to be constructed in the square was “La Real Casa de Panadería” (the Royal bakery), which is now the home of the municipal city council and which is located on the north side of the square. It’s the one with the beautiful painting on its façade . It currently has an exhibition going on which charts the history of Retiro Park, since its inauguration in 1633 (Mon-Fri: 11-2 and 5-8; Sat-Sun: 11-2).

Though the Plaza Mayor is probably the most popular tourist attraction in Madrid, it is still as popular as ever with the Madrileños (people from Madrid). A number of street café’s and restaurants cover the Plaza, from where you can buy over-priced Paella and from where you can people watch. You will alos find a number of street artists. One of the most curious bars in the plaza is called “Torre del Oro Bar Andalu”, which is decorated with photographs and related bullfighting memorabilia – the barmen are pretty good with helping you spend your Euros on their tapas, too!

On Sundays, the square becomes a focal point for traders and buyers of old coins and stamps – both within and surrounding the square you will find shops dedicated to stamp and coin collecting. At Christmas time the square converts into a huge Christmas market where you can buy all sorts of decorations and religious figures and during Easter processions cut through it. The square has a number of large, arched portals leading from it and in a street leading off one of them, c/ Ciudad Rodrigo, you will find a little bar called La Pequeñuca, where you can enjoy a bocadillo de calamares (bread roll with deep fried squid rings) and a glass of cider for a couple of Euros. The same portal will take you to the Mercado de San Miguel, a market which dates back to last century, though its current aspect is from 1915.