However, we have taken the decision to revamp the site and give it a completely new feel and to give it some new direction. We expect that this process will take a few weeks to move over and hopefully then we will be up and running with new content, discussions and new products. If you'd like to speak to me in the interim, please visit the contact us page of the Marketing Tom website.

Here are some beautiful pictures of Madrid’s Retiro Park, completely covered in snow.

As many of you will have noticed this website has not had many articles published of late!! This has purely been down to the fact that I have dedicated ALL my time to building my consultancy and training company, Marketing Tom Media.

However, in 2009 I plan to change the whole direction of Mad About Madrid and intend to turn it into one of the most exciting travel blogs on the web. It will feature video blogging, Google mashups and a number of Social Media tools.

In order to make this happen I require the help of collaborators from within and outside Madrid. They will have an understanding and love of the city and be willing to write articles, take photos and even add videos.

If you would like to help me realise the potential of Mad About Madrid and make some money along the way, please get in touch with me. I will be in Madrid from the 26th December for 10 days if you’d like to meet up for a coffee (or a beer!).

If you’re a regular visitor to this site you will have seen that postings have been a little on the thin side recently!!

I have not posted to this site since February 28th, 2008 – that’s 3 months without posting!

Because I have been developing my own Internet Marketing Training and Consultancy Business in Cardiff, Wales. Over this time I have managed to achieve Accredited Centre status from the Chartered Institute of Marketing, delivered an eMarketing training programme in Jakarta, rolled out some Social Media Marketing courses and done much consultancy. If any of this interests you head over to Marketing Tom Media , otherwise stick with Mad About Madrid

Marketing Tom Media has taken up much of my time over the last few months and shortly I will be working taking the big step to work full-time for my own business. Cool! For those who are REALLY interested, please take a look at the courses I run such as the eMarketing Award and Social Media Marketing Courses.

However, I am going to start to focus some of my newfound time on Mad About Madrid and make it THE best resource for information on Madrid on the web.

The other day I mentioned that I had just completed adding items on to my new Mad About Madrid Amazon Store (or aStore). Well, thanks to my wife Olga (cheers Ol) the Amazon UK store is now up and running. Please, take a look around it and, like the US one, let me know if I have missed out on any important products.

On Saturday 23rd September and Sunday, 24th September many of Madrid’s most famous buildings and locations will be lit up for the night and a number of ‘nocturnal’ (not just drinking!)events will take place. The “La Noche en Blanco Madrid” website describes the event thus:

The White Night corresponds to the model created by Paris’ Nuit Blanche, based on key concepts such as the city, night, culture, contemporary creation, cost-free experiences, discovering the city’s spaces and values, and pedestrian mobility supported by public transport and participation.

The website is pants, like many websites that come out of Madrid!, though it sort of gives you an idae of what’s going on that night. 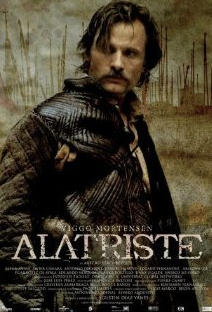 Today, I went along to the press conference and opening of the exbitition, ‘El Madrid de Alatriste, el Madrid del siglo de Oro‘ which coincides with the September release of the film "Alatriste", starring Viggo Mortensen of Lord of the Rings fame (he was the king if I need mentioning it!).

The exhibition at the Casa de la Panaderia attempts to offer a tour of 17th Century Madrid using original costumes from the film, pictures of the shooting (created as oil paintings of the actors), poems, anecdotes, etc. The Madrid settings of Altriste, from its author Artur o Pérez-Reverte, follow the oldest and most well-known map of the city of Madrid – called the Plano de Texeira. I believe that many of the locations for the film are well-known places which visitors can still see today.

Incididentally, the books of Alatriste have sold over 4.5 million copies in 12 languages and this is only the first instalment of the series.

Entrance to the Exhibition is FREE

This is not related to Madrid

Hat Tip to Vicen (my brother-in-law) for sending it to me. He think’s that Opá, yo Viazé un Corrá will be the Spanish song of the summer – I have no doubt he’s right. For more details on Manuel Jesús Rodríguez and El Koala, visit the El Koala website.

If you want to keep up-to-date with the latest articles from Mad About Madrid, just add your email address below or to the right

Here are a couple of photo albums that I thought that I had already published. The first is from Christmas 2004 to the first few days of 2005. The second is in April: with Spring still in the air but with warmer temperatures and a promise of nice weather to come.

Periodically, I publish a list of articles that I have previously written on this blog which people may find of interest. This will hopefully give you an idea of the breadth of information on this site. As always, if there is anything you would me to publish, just drop me a line.

March 11, 2004. Ten bombs exploded on four trains during the
rush hour in Madrid. More than 190 people died, almost two thousand
were injured. It was one of the most devastating terrorist attacks in
Europe in recent history. As in the United States of America on
September 11 2001, it was an attack on freedom and democracy by an
international network of terrorists. One year on, Madrid will be the
setting for a unique conference, the International Summit on Democracy, Terrorism and Security under the High Patronage of His Majesty the King of Spain.

One year on Madrid is holding the International Summit on Democracy, Terrorism and Security (March 8th-11th).
Aside from the King of Spain, its Prime Minister, Kofi Annan, Bill
Clinton and other illustrious former world leaders, some well-known
bloggers will also be taking part – people like Dan Gillmor, Joi Ito and David Isenberg.

On March 11th, people across Madrid and other Spanish cities will be marching to remember those who died.

The organisers of the event are also inviting people to hold meetings:

"Sit
down with friends, family or colleagues, and reflect on what happened
at Atocha station, what happened in New York, and in Bali, and in
Baghdad."

If you hold an event, you are asked to take notes and send them through to the event organisers.

"After your meeting, we want to hear from you about what you talked about,
what you think is really important in opposing terrorism and what you
think of the Madrid Agenda. You can send us an email or fill in the
form on our website. We will present those views to the Club de Madrid as part of the process of refining the Agenda over the coming months. Doing this will help make the Agenda relevant to people’s lives,
and it will also make it clear to political leaders that the Madrid
process matters and that the principles expressed have to be taken
seriously."

Their downloadable pdf document offres quite a few suggestions as to what you should discuss and how to go about organising a meeting.

Why don’t you get involved? Simply, go to the website and fill in the registration forms. In addition, let all your friends and peers know about the event .

Here are some thoughts: set up a blog, Skype friends and family, have a chat on Yahoo! or MSN Messenger, even do a podcast
of the meeting you hold. Feel free to add your thoughts and should
anyone wish to arrange a meeting, please let me know.

The articels on the Mad About Madrid site number around 300. In order to give new visitors a feel for the types of article on this site, I have listed a selection of them below:

For those who are new to Mad About Madrid, I though I’d add a selection of previous articles that I have written for the blog. It should give you a flavour of the sort of information you will find within the categories (on the left).