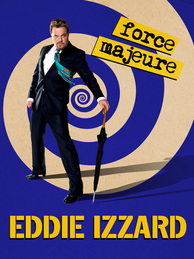 If you’re from the UK, you are probably familiar with the comedian Eddie Izzard. For those who are not, you may want to type his name into YouTube. Well, for the first time ever he will be performing in Spain – Madrid actually – and you have 6 nights to catch him. But the only downside is that the venue he is performing that only holds 100 people. Here’s what the website promoting the event has to say:

Internationally known Comedian Eddie Izzard will have played some of the biggest rooms all over the world by the time he arrives in Madrid for 6 of the most exclusive dates of the entire mammoth Force Majeure World Tour. He is the first ever Stand Up Comedian to have performed the Hollywood Bowl and is more often than not to be found in Arenas and other huge venues such as New York’s Madison Square Garden and London’s O2 Arena, so with just 100 seats a night these truly are special gigs , they are on a 1st come 1st served basis from the purchasing to the seating and we expect the to sell fast!

Tickets can be bought (if you’re lucky) from this website.

I’d also recommend you check out this interview by English journalist Simon Hunter with Eddie Izzard on El País.