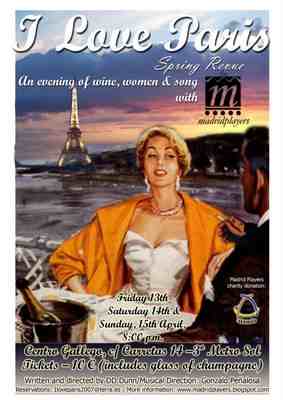 On the 13th, 14th and 15th April, 2007 the Madrid Players are putting on a show called I Love Paris Spring Revue. According to their blog, I Love Paris:

is a tribute to the music of the City of Lights: by the American composers who fell under her spell, and the French artistes who have served as her ambassadors to the world. From Irving Berlin to Jacques Brel, from Cole Porter to Edith Piaf, The Madrid Players’ newest musical revue will feature some of the best songs of Broadway and the Grands Boulevards, all with that certain je ne sais quoi of Parisian flair!

The Madrid Players are an amateur group, comprising some 60 people, which was fouunded thirty years ago. One third of the proceeds of the show will go to Alanda, an NGO for children with autism spectrum disorders. For more information an ticket details, visit the Madrid Players website.