According to Wikipedia, Zarzuela

is a Spanish lyric-dramatic genre that alternates between spoken and sung scenes, the latter incorporating operatic and popular song, as well as dance. The name derives from a Royal hunting lodge, the Palacio de la Zarzuela near Madrid, where this type of entertainment was first presented to the court. 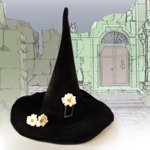 There are two main forms of zarzuela: Baroque zarzuela (c.1630–1750), the earliest style, and Romantic zarzuela (c.1850–1950), which can be further divided into two, main sub-genres of género grande and género chico although other sub-divisions exist.

Well, if you enjoy opera and can understand Spanish quite well, and you’re in Spain over the next couple of weeks, you could be in for a festive treat. The 150-year old Teatro de la Zarzuela is putting on one of the best works of the well-known (in Spain anyway!) composer Ruperto Chapi, La Bruja. If your Spanish is a little rusty and you would like to get the gist of what goes on, here’s a site that will offer you some advice. Alternatively, you can download the complete synopsis (pdf), in English and Spanish from the Teatro de la Zarzuela website. As someone whose musical tastes are quite varied, I would certainly recommend seeing this unique Spanish experience.